Scroll down for downloadable pics and info

"They were awesome. Easy to work with and great people  You won't be disappointed. We certainly weren't!"  Kevin J. Barry, Bonita Blues Festival

"Rusty Wright gained a whole slew of new fans with his smokin’ hot guitar and great blues songs. His stage
manager Bob Willie said it ranked in his Top 10 acts of all-time at the Unum Stage."  Bob Payne, entertainment editor, The Chattanoogan

"I have been producing blues concerts and festivals all over the world for over 20 years and I have never seen an audience reaction like I just saw this past Saturday night. The Rusty Wright Band was my opening act and they came out of the gate with an incredible atomic energy that brought everyone to their feet. Within the first minute of their first song they had thousands of people up and dancing." Steve Simon, St. John Blues Festival, USVI

“Dude – Where the hell did YOU come from?” Rickey Medlocke, Guitarist, Lynyrd Skynyrd

"A powerhouse of blues that thrilled the crowd."  Fort Pierce Jazz & Blues Society

"I've been around a long time. This was one of the best shows I've ever seen." Dan Welsh, Event Center at Colorama

"One of the BEST blues guitarists you'll ever hear!" John Galvin, Molly Hatchet

"Rusty, Laurie and the band are one of the top acts on the road." Brent Stockton, VanGarde Arts

"The Rusty Wright Band is just simply amazing and must be seen, heard and completely experienced to truly appreciate these phenomenal musicians enjoying their craftsmanship." Lou Phoenix, Phoenix Radio

"The Rusty Wright Band (RWB) put on a professional tour-quality show in front of a captivated sold-out house at Sarasota's Blue Rooster... These are superb musicians who deliver a performance that is every bit as good as the touring acts that we are accustomed to seeing in Florida this time of year. Searing and versatile guitar licks from Rusty accompany ear leasing vocal harmonies from Rusty, Laurie and Nic. Playing a wide-ranging style of music that while not totally blues is infused with enough blues riffs and adherence to tradition to pacify most blues fans. This is music meant to appeal to a wider audience and on that point the band hits the mark with room to spare." Suncoast Blues Society, show review, The Blue Rooster, 2021 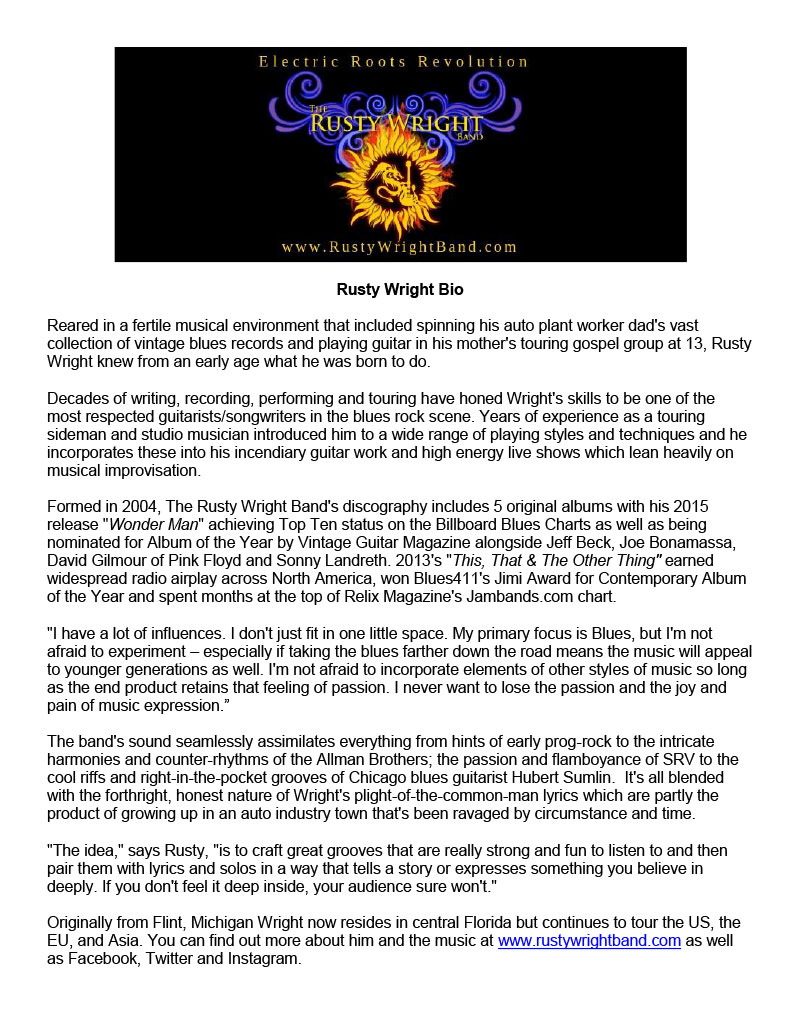